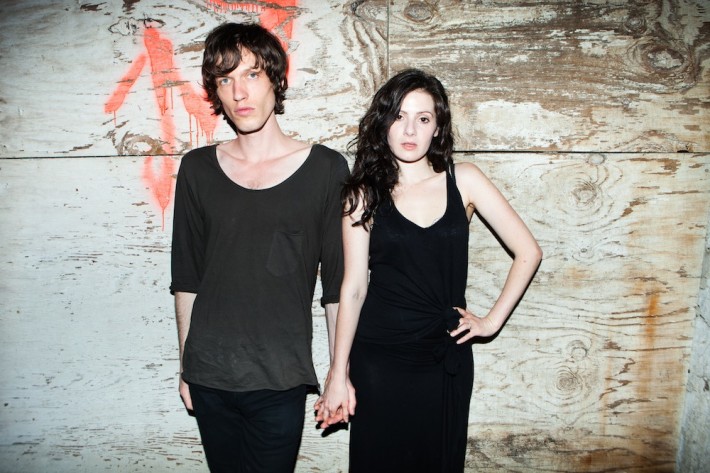 This is my first solitary album review, and since this is one of my personal favorites, I figured it good enough to start with. Though Passage came out in 2012, I didn't discover it until 2015 (thank you, Spotify). I was already familiar with front woman Aleksa Palladino, who I'd seen on TV shows like Boardwalk Empire and Rogue. Little did I know, she fronted a band in an underrated genre of music. Exitmusic fit in nicely with other genre favorites Beach House, Daughter, and Lanterns On the Lake.

There was a particular point in my life when Sigur Ros and Denali were favorites of mine. Exitmusic's Passage does the job of encapsulating the best sounds of both. Palladino and her husband, guitar player Devon Church, spearhead the effort to create layers of mournful moans, delayed guitars, and somber piano licks. Palladino waxes poet with her lyrics, crooning, "If the stars can align all of man with night sky, then why can't my heart mend the break/but I'll love you same because it's only a dream and the dreamer is bound to awake." It's comparable to something straight off the pages of some obscure, forgotten Keats poem on the complexities of dreaming and unrequited love.

The album begins with the best track, the ultra somber "Passage." It begins with a pensive piano, popping fireworks, and Palladino's layered vocal stylings, stamping a mood of spectral angst. Not to be cliche, but her voice is truly incomparable. She comes off a bit like a damaged, wounded widow. Her voice is not perfect or dainty. It's all about raw emotion, and sometimes, that doesn't come off perfect or dainty. Her voice is grounded and gritty and unpretentious - the new, cryptic soul at an AA meeting with an extraordinary story to tell. Her voice is unassuming, painting the soundscapes with sorrowful cries, lyrics likened to short stories laden with metaphors and ethereal delight. "Passage" is riddled with feral cries and highly emotive melodies that dare you to feel something.

The second track, "The Night," is the second best on the album. While "Passage" takes you for a ride amidst a dismal forest of specters, "The Night" is slightly more optimistic in tone, and Palladino's voice, while still emotive, is quite beautiful. Devon Church works his guitar minimalistically enough, though the chords work expertly for the melody Palladino has crafted with her voice. The quote from my first paragraph comes from this song, as does the hopeful chorus, "My aim is slightly high/in the silent night."


"The City," switches it up from somber and optimistic to a more aggressive effort, especially in the chorus. The band seems to take us on an visceral roller coaster ride, displaying every aspect of every emotion possible. The song remains calm and collected, though slightly volatile throughout the verse, only to explode in the chorus with pounding drums and guitar string lashings. The dark tune was actually used for the short-lived TV drama, Dracula, starring Irish actor Jonathan Rhys-Myers.

The 4th song on the record is another personal favorite. Much like Jeff Buckley's "Grace," Exitmusic often paint pictures and tell short stories with their lyrics. Palladino does just that with "White Noise," a sorrowful track that conjures the image of some departed soul pining for a return to their lover through the conduit of white noise. "I'm in the flesh of the lumbering few, I'm on the call trying to get back to you." The melodies are sweet and sad and evocative. In the chorus, Palladino wails, "I'm in charge of the coal and the fire." It comes off like a short story about a woman who's died, is put to work in the depths of hell, but often attempts to reunite with her lover, who's either still living, or who is already residing in some proverbial afterlife.

"Storms" is another tearful track with heartfelt melodies and guttural cries to supplement the album's theme of isolation. This theme seems to run throughout the entirety of the 10 tracks, though it varies enough to give each song it's own unique flavor. "The Wanting" is next, probably the most akin to Sigur Ros with its predominant falsetto wails throughout the chorus. It carries a Sigur Ros-like ambiance with it, which is really what glues each song to the next.

"Stars" is extremely ethereal, and much like "Storms," it carries a deeply emotional chorus with it. I can't begin to fit myself into the mind of Aleksa Palladino, but these songs seem to be penned by someone who has experienced a lot of sorrow and grief, wearing them like a badge throughout the album. "The Modern Age" is one of the band's more popular tunes, while "The Cold" reminds you that "you are alone/I read it in the paper." The delicate melody and the agonizing whines are enough to incite chills. The finale, "Sparks of Light," is the most similar to the songs featured on their 2007 debut, The Decline of the West.

Passage is a remarkable album from start to finish. I only wish that Palladino would place as much emphasis on Exitmusic as she did her acting career, though I understand that we live in a world where artists who want to keep their musical integrity are rendered starving. During a rough patch in my life, Sigur Ros' Agaetis Byrjun and Denali's self-titled album were there to comfort me. Exitmusic's Passage is a perfect culmination of the two, which is why I'm such a fan (that, and because of Palladino's soulful, poetic lyrics). Passage is entirely understated in the greater scope of indie music, so I'm glad a few of the songs featured on it have gotten enough attention to appear on shows such as Dracula and Showtime's Shameless. The band has a debut album, an EP, which was actually more like a preview of the songs on Passage, and then Passage itself. They collaborated with labelmates Mister Lies for the electronic track "Hounded," and composed a cover Bowie's "Space Oddity," which I personally think is better than the original (Oh yes, I said it). The material on Passage is dark in more ways than one, but it's the wistful kind that makes you appreciate the beauty in sadness.