The Five Venoms coincides with my kung-fu renaissance, my re-introduction back into the movies that shaped my childhood. I used to work a youth center, where I worked with a guy who also love these movies. He let me borrow The Five Venoms on VHS, and the feeling I got watching it was both nostalgic and gleeful. The movie follows five martial artists trained in five different styles of kung-fu - centipede, snake, scorpion, lizard, and toad. Once the five leave their training, their master feels that they may use their skills for nefarious reasons. He tells his newest and final pupil to find track the Venoms down, though the task won't be easy, as they have shed their masks and blended into civilized society. 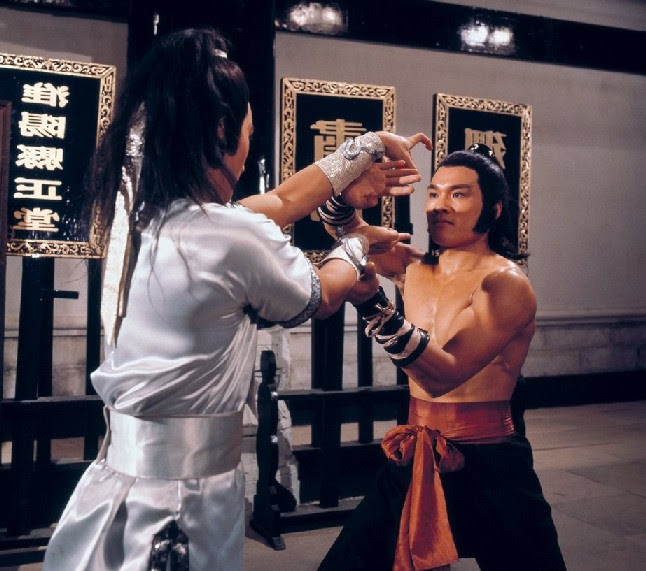 Centipede and Snake knew each previously, as did Lizard and Toad, though no one knew the identity of Scorpion. Centipede and Snake are looking to rob an old kung-fu master of his gold, and go on a killing spree attempting to achieve that goal. Meanwhile, Toad, along with Lizard, who has since become a municipal policeman, is on a clandestine path to bring the killers to justice. Scorpion is later revealed as Lizard's policeman partner, and is clearly playing both sides, trying to snag the gold for himself. An epic fight ensues that pits the Venoms against one another, along with the latest pupil, whose kung-fu can only defeat one of the Venoms when it's coupled alongside the style of another venom.

Every Saturday growing up, I used to rush home at 3 pm to watch Black Belt Theater, a network segment that every week offered up a dubbed over kung-fu delight. Of them, Shaolin Mantis was the first that I saw and was a favorite of mine growing up. Wei Feng is a government agent working for the emperor in China. He seeks to infiltrate the household of resistance fighters as a teacher for a spoiled, kung-fu-practicing girl named Chi Chi. The two of them eventually fall in love, and the only thing that will keep the grey-haired master antagonist from killing Wei Feng is if he marries Chi Chi and continues living in their house. There is a coveted list of other resistance fighters that the old master has possession of, and Wei Feng steals it, looking to make a quick escape.

With Chi Chi in tow, Wei Feng fights his way through a miriad of Chi Chi's uncles on the way to the master, Chi Chi's pipe-toting grandfather. While trying to provide her husband's escape, Chi Chi is killed and Wei Feng is left for dead when he plummets over a cliff. This is when he comes across a praying mantis. He observes the creature, taking cues from it and indirectly learns a new style of kung-fu from it that he can take back to the master and topple his regime. Wei Feng is essentially double-crossed in the end, but he goes out like a champion, the first and last man to ever master mantis-style kung-fu. Like many of these late-70s kung-fu sagas, Crippled Avengers comes off more like a fable. It's the story of a kung-fu master's vendetta in which his wife's legs and his adolescent son's arms are chopped off. We start off feeling bad for him, but the master and his son grow up to be tyrannical bullies, killing and disfiguring anyone who crosses them. Four of those are either completely innocent or pay for the freedom of speaking their minds. Four ordinary guys are blinded, crippled, made deaf and mute, and made mentally handicapped by the master and his iron-armed son. The four are a ragtag crew who help another lost soul back to his own master. The master is so grateful that he trains the cripples so that they can take their revenge on the tyrants who wronged them. 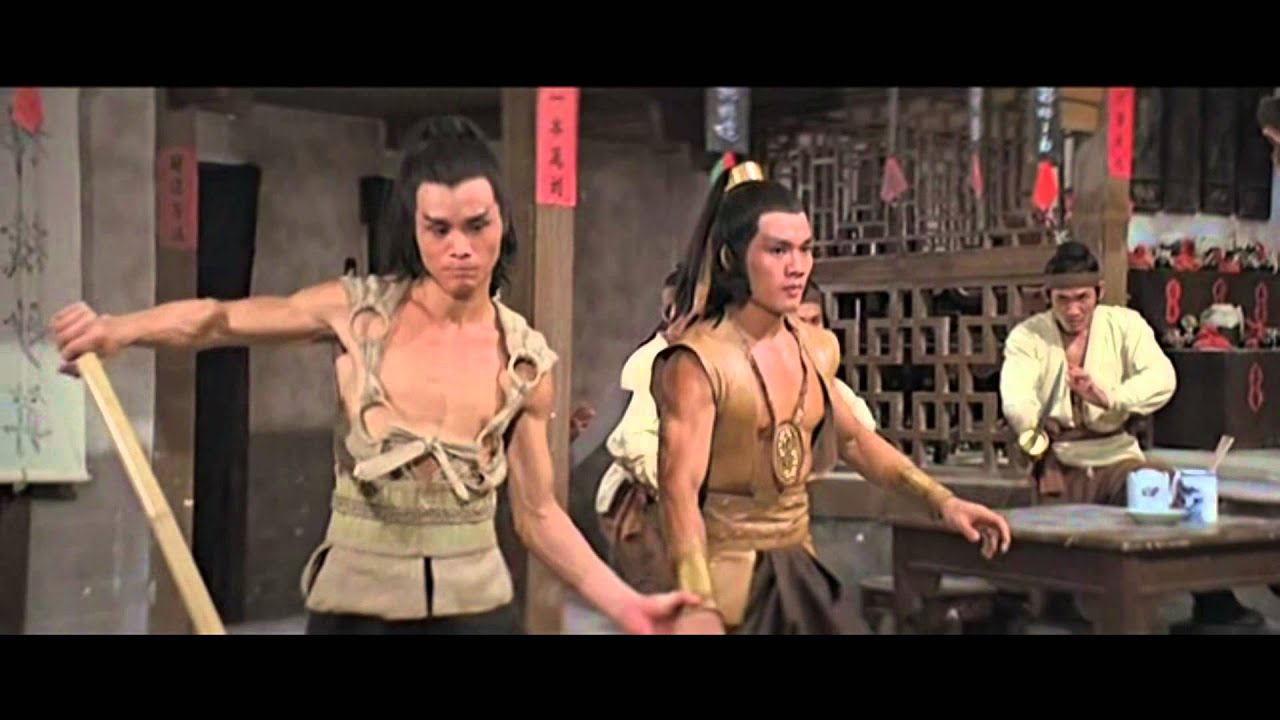 Crippled Avengers is a pretty simple plot that doesn't take too long develop, with the origin stories of the master and his iron-armed son coming at the very beginning. Most of the avengers were also featured in The Five Venoms and The Kid With the Golden Arm, referred to affectionately by kung-fu movie enthusiasts as the Venom Mob, a sort of kung-fu Brat Pack. Lo Meng is the actor featured in most, well-built and poised for the feature role.

A lot of king-fu movies liked to dabble in gold, and in martial artists who mastered a certain style. There is supposed to be a shipment of gold taken to group of famine survivors, but word has spread that the Chi Sha Gang, headed by Golden Arm, Silver Spear, Iron Rogue, and Brass Head, will hijack the shipment en route. The man in charge of protecting it, Yang, hires a sword-swinging couple, Li Chin Ming and Miss Leng Feng, along with drunken master Agent Hai Tao, to protect it. Hai Tao fights better when he's drunk, and is constantly seen carrying a canister of wine (which actually just looks like water).

The Chi Sha are taken down one at a time until only Golden Arm remains. His best accolade is his strength and his arms that are likened to metal, capable and twisting and destroying the blades of opponent swords. He soon kills Li Chun Ming, but is defeated and blinded by Hai Tao. Then, the two unlikely allies battle a double-crosser together. At the conclusion, a now blinded Golden Arm swears he'll live quietly and retire from his bandit ways. Miss Leng Feng has other ideas, seeing as how it was Golden Arm who killed her lover, Li Chi Ming.

Executioners from Shaolin is unique in this genre because it's king of two separate movies combined into one. The first half finds Hung Si-Kwan engaged in a Buddhist versus Daoist fight to the death, the two factions waging a war that puts Hung Si-Kwan on a path toward the beautiful Fang Yun-Chun. She is extremely talented at the crane technique of kung-fu, while Hung is a master of the tiger style.

Plot points in the movie are more intimated than explained, with Hung and Fang having a son together, Hung Wen-Ting, who is raised learning the crane style. Tiger is more masculine, while crane is more feminine, so Hung Wen-Ting wears pigtails like a girl, as he is learning the crane style from his mother. Sure, he gets picked on by peers, but he fends them off only to get scolded by his father, who refuses to teach him tiger style. This is never explained, but we have to assume that Hung Si-Kwan won't teach Hung Wn-Ting tiger style because he doesn't want him involved in the religious war with the Daoists, headed by the evil eunuch and kung-fu master, Pai Mei.

The character of Pai Mei made such a lasting impression on martial arts culture that nearly 30 years later, Quentin Tarantino made him a central force in Kill Bill Vol. 2 as the teacher of protagonist, Beatrix Kiddo. 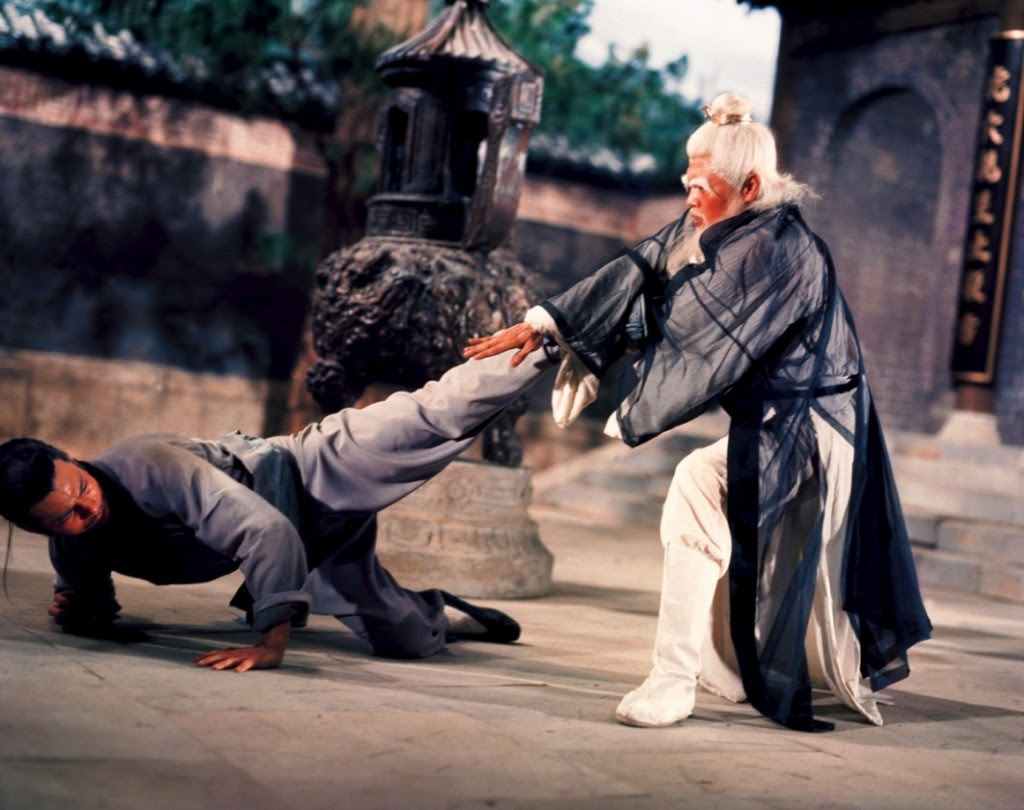 The Pai Mei of Executioners fame has an interesting super power. He's a eunuch, and while he does possess one weak spot in some unknown area on his body, that weak spot shifts after 3 pm, making him even harder to defeat. Hung Si-Kwan spends decades trying to find the weak point. His first showdown with Pai Mei results in defeat, but one that he walks away from. As he will never stop trying to avenge his master, Hung Si-Kwan seeks out Pai Mei a second time. This time, he is killed. It's then on Hung Wen-Ting to avenge his father. On his mother's request, Hung Wen-Ting teaches himself tiger style by way of his father's old manual and writings. He learns this to go with the crane style he's been perfecting his entire life. After finding the right combination of the two styles, he defeats and kills the legendary Pai Mei in dramatic fashion.

Executioners from Shaolin presents a neatly-woven tale of vendetta and family saga, one in which the main protagonist dies, but his periphery son steps up to be the hero in the end. The movie is so different from any of the others, and the epic end fight and the familial significance leading up to the fight makes it stand out on a list full of innovative, allegorical, fable-like kung-fu offerings.