I grew up watching Westerns with my dad, just as he'd grown watching all the John Wayne and Roy Rodgers movies he could handle (which was a lot). Apparently, some of it took, which can allow me to identify a good Western when I see it. There are a few surprises, a few unknowns, and a few fundamental favorites for the genre listed below. 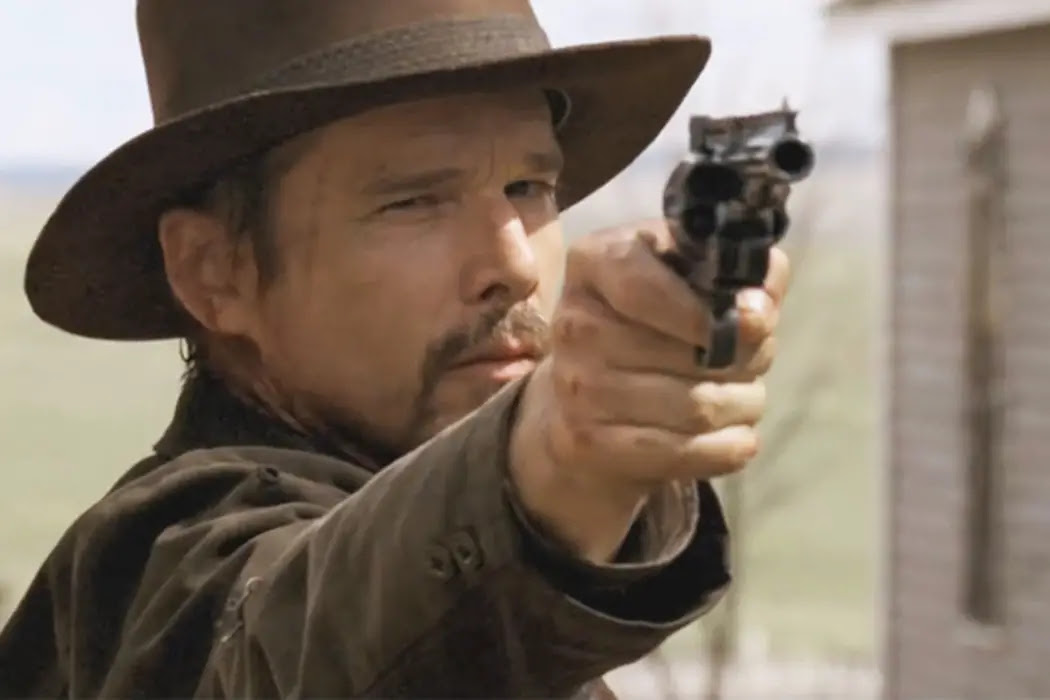 I think I caught this one on a cable channel one day. It offers a nice line-up with Ethan Hawke, John Travolta, and Taissa Farmiga, playing their parts in an unorthodox Western, one that offers equal parts slapstick humor and bloody violence. The movie sticks to a simple enough formula - drifter comes into town, is forced to fight, then is persecuted for the trouble he's started, which he didn't really start at all. Hawke plays Paul, an ex-soldier drifter with a dog who is wrongly hunted down by Gilly, the hot-headed son of the Sheriff, Clyde Martin (Travolta). Gilly and his bumbling henchmen push Paul, literally, too far, which forces the sheriff's hand. 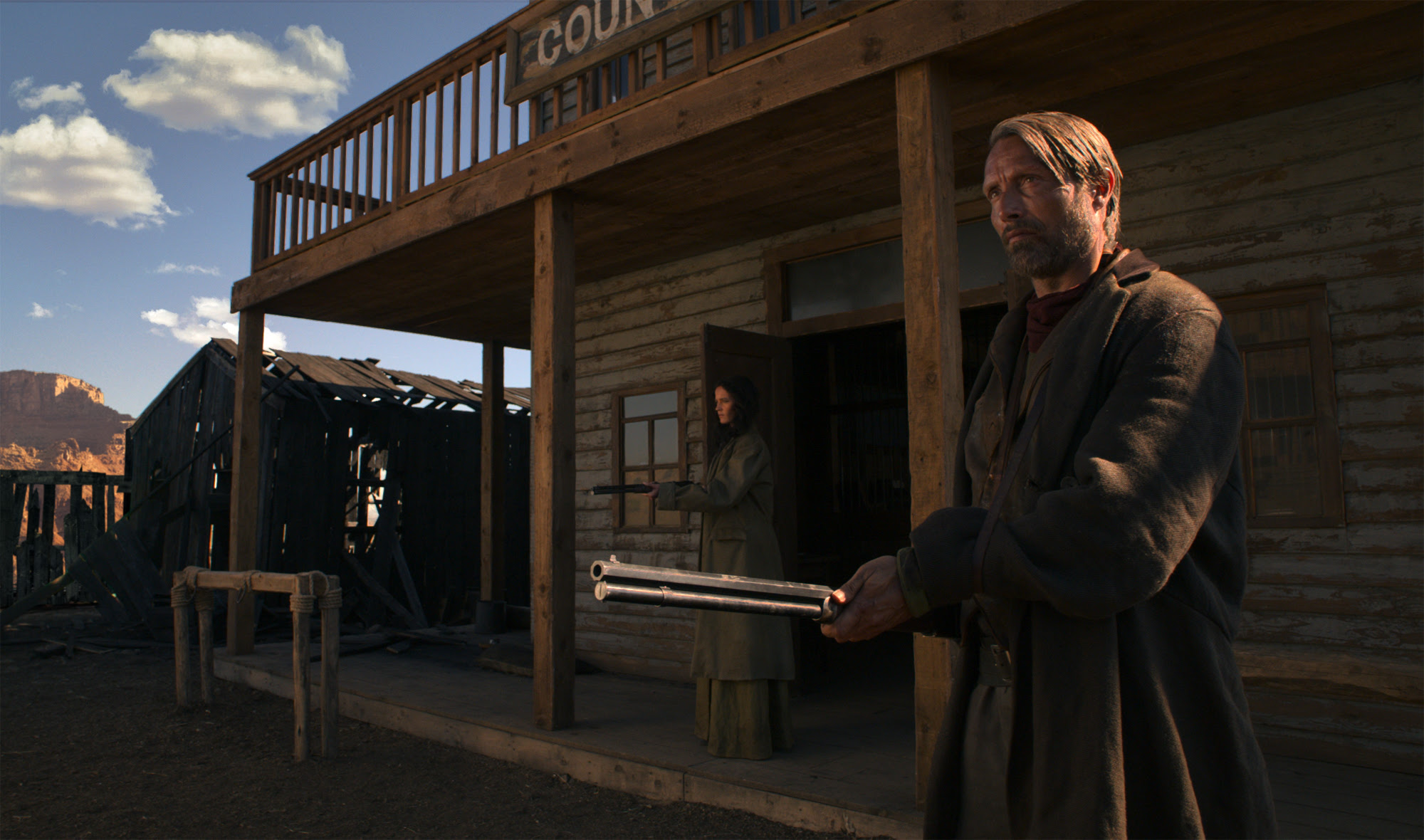 This one stars Danish sensation Mads Mikkelsen as Jon, a Danish settler who experiences one hardship after another in an attempt to settle in America after fighting a war abroad. The film also stars Penny Dreadful alum Eva Green, and The Walking Dead alum, Jeffrey Dean Morgan, who plays a better bad guy than most. Jon takes no pleasure in the vengeance he must have against Delarue (Morgan), whose brother Jon kills when his family is attacked. Madelaine (Green), used and abused as she is, plays an interesting role as well, a mute woman who's bent on her own revenge. Jon is the reluctant killer, and Madelaine is the black widow who's been wronged one too many times. 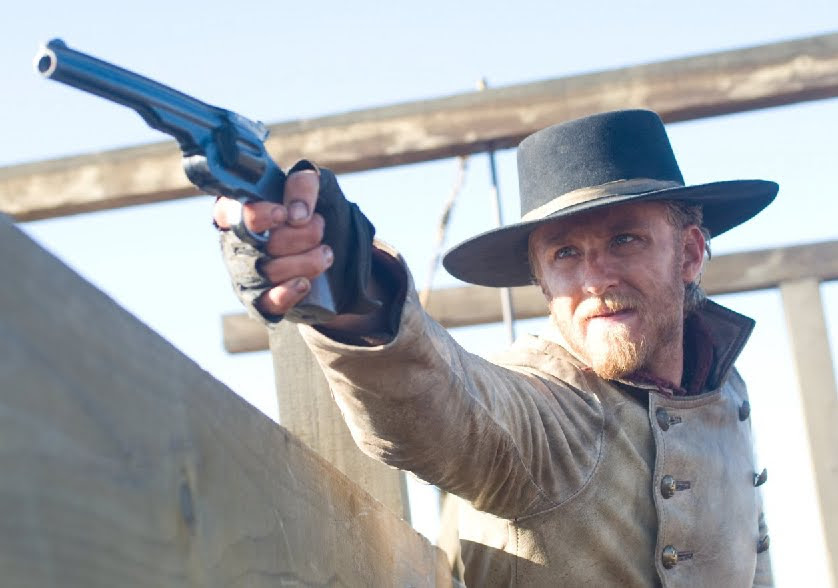 Ben Foster was for a time one of my favorite actors. He's never really carried a movie, but certainly could if given half a chance. In 3:10 to Yuma, he plays bit bad guy Charlie Prince, the second in the outlaw gang of Ben Wade (Russell Crowe). Not only is Foster a great actor, and wears a cool jacket and carries a cool gun, but he's my doppelganger, even though he's about a foot shorter than me. But despite all the praise, Foster isn't the best part of 3:10 to Yuma. A remake in itself, the movie pits simple farmer Dan Evans (Christian Bale), along with a town full of law men, against Ben Wade, as they attempt to bring the outlaw to justice. Charlie Prince and gang follows the lawful caravan across the desert in order to free Wade. The ending is classic. 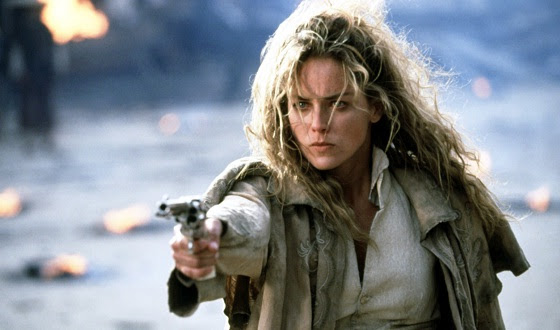 The Quick and the Dead is about as campy as they come, but it's no less entertaining for it. It's campy on purpose, which gives it a unique style for a Western movie. It features Sharon Stone, a very young Leonardo DiCaprio, and Western movie staple, Gene Hackman, who is excellent as town villain Herod. It's the Bloodsport of Western movies, pitting would-be challengers against one another in a shootout contest to win a boatload of cash, courtesy of Mr. Herod and his paid henchmen. Sharon Stone plays Ellen, a mysterious drifter bent on revenge, who looks to take out Herod with the help gunfighter-turned minister, Cort (Russell Crowe).

In one of the first movies I remember suggesting we root for the bad guy, Unforgiven grows on you after every viewing. It's a long one, and it takes a lot to get to the legendary shootout in the end, but man, is it worth it. Clint Eastwood is at his best here as William Munny, supposed murderer of men, women, and children. He's settled down, is a widower and a farmer with two children, and needs just as much money to survive as the next guy. This is why he embarks upon a dangerous mission with old friend Ned (Morgan Freeman) and the Kid to avenge a brutalized prostitute at the behest of her associates. Though, Little Bill (Gene Hackman) won't let such stand in his town of Big Whiskey. 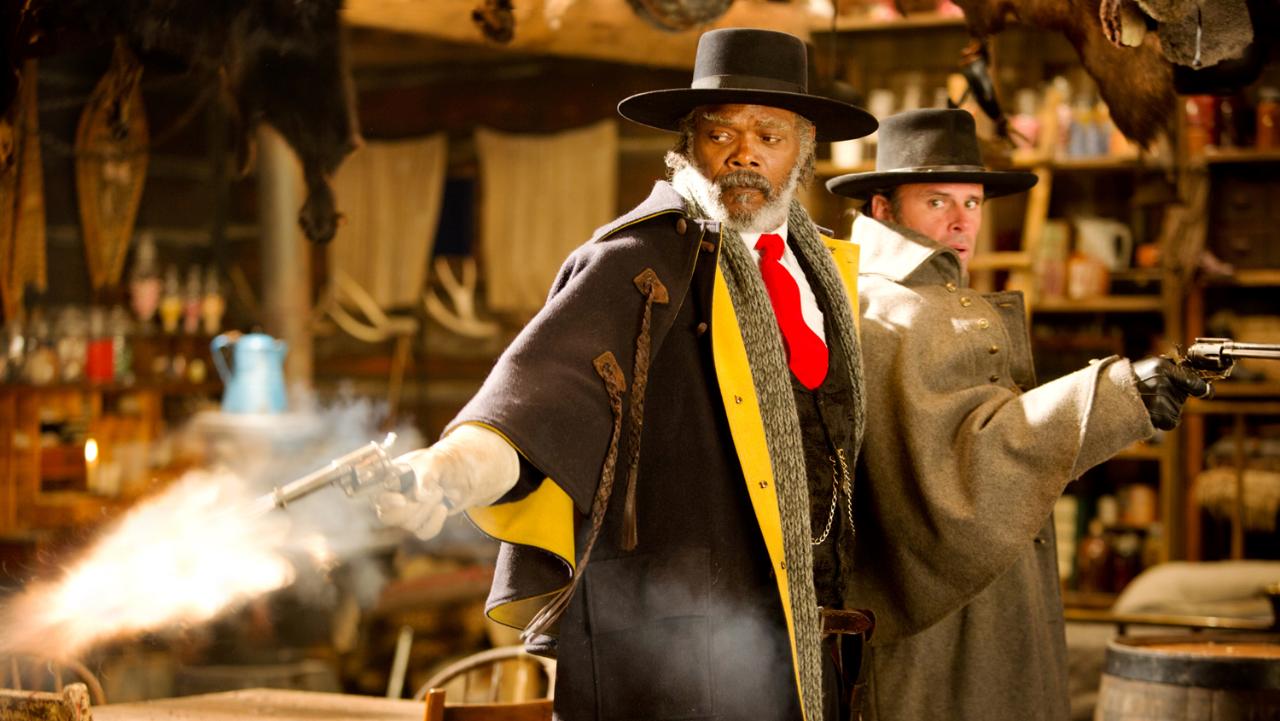 The Hateful Eight is one of Tarantino's best, if not THE best. He loves to bring together a who's who of criminals and shady lawmen in order to lead them to a deadly conclusion. I love movies like this, and The Hateful Eight gets it right on so many levels. Former Civil War soldier turned bounty hunter Marquis Warren comes across a second bounty hunter, "The Hangman" John Ruth (Kurt Russell) in a Wyoming snowstorm. Ruth is on his way to hang outlaw Daisy Domergue. A band of misfits, some who might have nefarious intentions, soon join the cast in Minnie's Haberdashery, a literal shelter in the storm. 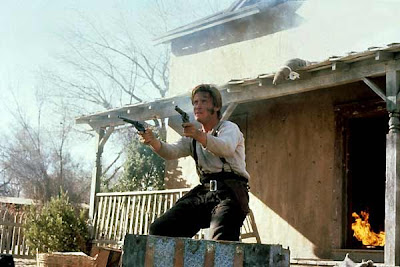 This one was a childhood favorite, and it's still one as an adult. Young Guns tells the slightly fictional exploits of Billy The Kid and his gang of teenage accidental outlaws, riding across the barren plains of New and Old Mexico. Emilio Estevez is Billy, a role he was born to play, a young pistoleer with a wild, brazen, unpredictable disposition. When their benefactor is killed, Billy, Dick (Charlie Sheen), Doc (Keifer Sutherland), Chavez (Lou Diamond Philips), Charlie, and Dirty Steve, set out on a mission to bring the killers to justice. They are deputized, but Billy decides to execute the murderers without trial. This puts the group into the cross hairs of the law, a couple of bounty hunters, and even the US Army. 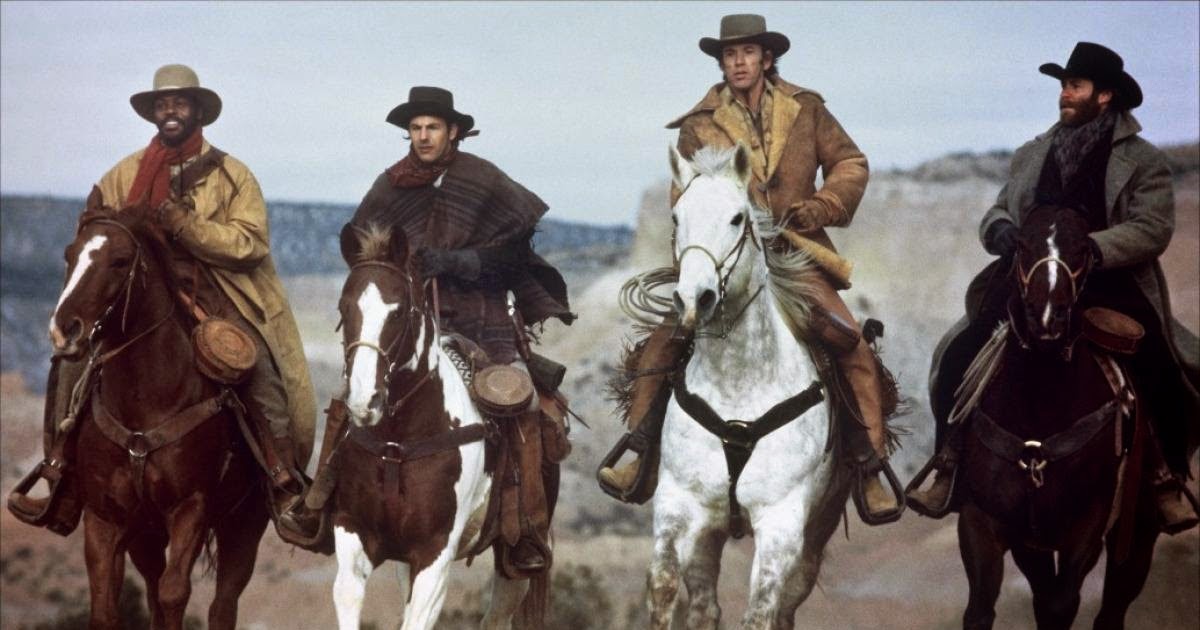 Silverado pretty much defines the epic Western. It features an ensemble cast with a plethora of story lines, all rolled into one. Emmett is attacked by would-be assassins, Jake can't stay out of jail, Mal is trying to rekindle a relationship with his father and his uptown girl sister, and Paden has an old bone to pick with his old outlaw riding buddies from his old outlaw days. All of that seems to mesh into one is this epic masterpiece, one I first saw as a boy, and one I watch even now when given half the chance. It features a young Keven Costner in one of his best roles, a young Danny Glover as Mal, who's dangerous with his father's Henry rifle, and a young Jeff Goldblum, who's not quite as slick as his character name suggests. 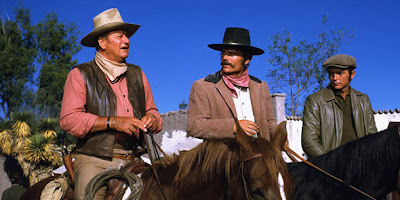 Big Jake is one I grew up on for sure, and one with likely the best story line on the list. I have often thought a remake, or even a modern retelling, would suffice for it. I'm not really a John Wayne fan, but he lead this little-known gem. He stars as Jacob McCandles, a father who deserted his family years before with a collie sidekick simply named Dog at his side. When the grandson he never knew he had is kidnapped, his well-do-do ex-wife enlists his help, along with his two sons, James and Michael, and his old Native-American running mate, Sam Sharpnose. Together, they track down the men responsible, who are holding the boy, also named Jacob, for ransom.

This one is probably everyone's favorite cowboy movie. Val Kilmer's Doc Holliday is one of the best portrayals in movie history, with excellent one-liners and a no fear attitude. Kurt Russell plays legendary Kansas lawman Wyatt Earp, who moves to Tombstone, Arizona to start a new entrepreneurial life with his brothers, Virgil (Sam Elliot) and Morgan (Bill Paxton). Lawlessness at the hands of a marauding bunch called the Cowboys sees his brothers take up the badge again, much to Wyatt's chagrin. A war then ensues between the Cowboys and the Earps, and with the help of Doc, they attempt to bring law and order back to the land.