Way of the Dao

Every once and awhile, a hardcore/metal band comes along to sweep me off my feet with a new, blistering, well-crafted album. It happened in 2003 with Every Time I Die's Hot Damn! It happened again in 2006 when Spitfire reunited for Self-Help. Then it happened again in 2016 with Frontierer's Orange Mathematics. I thought I had heard every trick in the book, enough to know that the genre bases had been well-covered, having heard every chugga chugga, harmonic squeal, and double-bass breakdown imaginable. Enter The Callous Daoboys.

The sounds of Frontierer and genre contemporaries The Tony Danza Tapdance Extravaganza inspired me to compose a playlist. Included on the list was The Callous Daoboys and their most popular track, "Fake Dinosaur Bones." I thought the screamer/singer had a cool style, but they were lost in the shuffle, just another new metal/mathcore band serving my own means to an end. Then, I delved more into the album from which the track came - 2019's Die on Mars. The pictures featured two females to go with four males, something I didn't expect at all. Bands that sound the way the Daoboys do don't usually frequent two X chromosomes, and what the ladies bring to the band is an electric violin and a heavy, second axe. I then hit play on the irreverently humorous "Flip-Flops at a Funeral." After watching the irreverently humorous video for "Fake Dinosaur Bones," the band, especially frontman Carson Pace, seemed to encompass a sort of flip-flops at a funeral persona.

The track starts heavy and frantic, followed by discordant guitar licks and off-timed stops, asylum-like wails and a melodic, emo-ey, elevator music-like interlude in which Carson Pace channels his best Conor Oberst from Bright Eyes. He ends the track with a mischievous giggle, sounding like a cynical teenager on senior skip day. Pace has a lot of fun with his vocal stylings, which is refreshing. He isn't afraid to take chances, and its apparent that he doesn't take himself too seriously, like so many others do in the genre. The band is young, but their sound is well-orchestrated and unforgiving,  adventurous and undeterred by the giants they might share the stage with on any given night.

Track two, "Dogfight over the Trenches," begins with a low-tuned acoustic guitar riff, one that soon bleeds into a full band meltdown. Heavy drum wallops, searing guitar feedback, and vocal cord-stressing howls define the second act of the song. After a riveting third, we're treated to a fundamentalist rant about the coming of the Antichrist. The Daoboys parody this, and the warning leads itself into the third track, "Fake Dinosaur Bones." At the 56-second mark, we're treated to a re-imagining of old Dillinger Escape Plan, fast and heavy pulse-pounding metal in which Pace tells us that we "won't make it," but we better "fake it now." The video is posted above, and it's refreshingly funny, which likely means that the band has as much fun behind the scenes as they do on stage.

They clearly don't take themselves too seriously, and Carson Pace voices as much in "Contrail Crucifix." His self-deprecating sentiments are aired in a quiet, poorly-rhymed interlude before the band breaks into one of the sickest riffs on the record and Pace trails off into a punishing, Greg Puciato (Dillinger) dirge of sinister screams. The band fades in and out of funny and ferocious, playful and punishing. This track gives the listener a little of everything, covering the Daoboys wide bag of tricks.

"The Absolute Barnstormer" sounds like the throes of an insane asylum until it breaks into equally insane restaurant skit, brought by a jazzy rhythm carried by a snazzy saxophone. It seems to be Pace's rant on socialite behavior, showing that he has a lot to say behind his madman microphone style. "Blackberry Delorean" is one of the better tracks on the album, with Carson Pace opening with indie-boy croons, only to be followed by his signature screams and a sick guitar riff. By the end of the song, we're being reminded to "stay out of Georgia!," and the video is a lot of fun too, adding another feather to the cap of the band's slapstick humor.

"Faraday Cage" breaks into a nasty, sludgy, old school metal riff, then eeks into a quirky radio DJ interlude, reminscent of "The Cavalcade of Gillete Sports" from Glassjaw's 2001 sophomore effort, Worship and Tribute. "Pure Schlock" features southern metal riffs under some pretty southern metal singing, which only leads into a slew of nonsensical, muttering screams, ala Glassjaw's "Siberian Kiss." "Die on Mars (Sun Spot)" ushers in the first sense of meaningful melody since the opening track, and final track, "Die on Mars (Addendum)" takes us out with a fuzzy piano ballad, which sounds like a drunken piano man from the Old West banging out the sorrows of yesteryear. The tracks fades out with a pre-recorded evangelist woman praying with a would-be caller on a lonely voicemail recording. The album features of slew of references to the hypocrisy found within organized religion, from Carson Pace's nihilistic growls to the carefully-placed sound clips found in "Dogfight Over the Trenches," "Fake Dinosaur Bones," and "Die on Mars (Addendum)."

The band claims the playful, cynical lyrics of Every Time I Die, the stunted, lingering feedback of the Chariot's live studio album, and the frenzied, mathrock sensibilities of Dillinger Escape Plan. They also bring something completely new with the sounds of an electric violin, odd little skits about restaurant waiters and disc jockies, and a fearlessly feral vocal style that channels both old school Keith Buckley (Every Time I Die) and Josh Scogin (Norma Jean, The Chariot, '68). All in all, Carson Pace is one of the most entertaining metalcore vocalists I've heard in a long, long time. 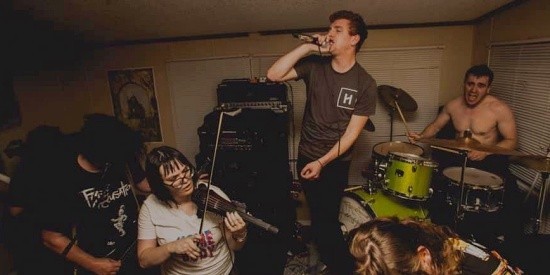 Another reviewer spotted the irreverence before I did, and claimed that two of the band's favorite albums were Hot Damn! (Every Time I Die) and Calculating Infinity (Dillinger Escape Plan). The Callous Daoboys, in itself some tongue-in-cheek wordplay for the Dallas Cowboys, wear their influences on the sleeve, while managing to bring something completely new to the genre.
Posted by Will at 1:11 PM