I've lately been listening to Deftones' 1997 sophomore album, "Around the Fur." Ever since it initially came out, it's been one of my favorite records, number five on my all-time list. This is also singer Chino Moreno's favorite Deftones album, one he claimed he repeatedly listened to between the time of the recording and release. It's a true concept album, the songs intricately linked together by colorful, cryptic lyrics and a dismal, airy ambiance. The album is iconic, not only in subject matter, but in its ingenuity and brand of innovative brutality.

Track one on the record is an excellent encapsulation of the band's progression as a heavy band. "My Own Summer (Shove It)" shows the maturation from a nu metal act to a band basically creating its own genre, so original it could scarcely be emulated. Guitarist Stephen Carpenter constructs a meticulous riff over a pensive beat, while singer Chino Moreno layers his pent-up scorns over to the top. In the chorus, he unleashes his fury and the guitars only slightly morph to a heavier incarnation of the verse version. Chino targets the sun on this one, painting the soundscape with shades of his own summer, one in which "the shade is a tool, a device, a savior." He apparently likes it dark, surmising that "I think God is moving its tongue, there's no crowds in the streets and no sun in my own summer."

Shifting the focus from the seasons to the fashion industry, and the superficiality of the fashion industry (the primary theme of the record), Chino croons on "Lhabia" over heavy ax blows, "It looks and feels great, but look at what it's doing to you, that's okay, look at how it feels." The songs starts abruptly with Carpenter's thick guitar chugs, accompanied by Chino's faint vocals, meshing heavy and soft into one. This song was a big inspiration for Seventh Vision, one of the many bands I was in. I couldn't find a good version of the song to post, though I did find an acoustic version.

Where "Lhabia" ends, "Mascara" begins. Upon my first listen of the album, this track stuck out as the most dynamic departure from their debut album, "Adrenaline." It's an ambient little ditty, a lyrically-rich jam session turned into one of the cuts that made the record. Though the song is overly soft, it hardly portrays the role of a lullaby. It is instead as stoic a track as I've ever heard, leaving behind the melody and beauty that the title might suggest. It's an uneasy, bleak morning with a significant other, unsure of exactly where you stand, or if you even stand at all. The song is filled with cynical lines such as "I hate your tattoos," and "Well, it's too bad you're married, to me." "Mascara" fades flawlessly into the title track, "Around the Fur." Drummer Abe Cunningham bursts in with a rhythmic pummeling, tricky and precise. Chino comes into play at the same time as the choppy guitars, swaying, "Hey, vanity, this vial is empty, so are you. hey glamorous, this vial is not God anymore." He calls out the fashion industry and all its co-conspirators, leering at the ugliness buried underneath the glossy veneer. The fur, of course, refers to the fur coats and high stakes vanity of the limelight, and it is evenly chopped to pieces by this adrenalized assault. The defiant anthem is pulsating and relentlessly, pausing only in preparation of its final pillaging. "Speak, I don't get, should I ignore the fashion or go by the book? I don't want it, I just want your eyes fixated on me." It seems as though Chino took a model for a love interest, the story didn't end well, and he eventually saw her for who she really was. After all, he has come out and said that the time period of this record was the angriest he's ever been in his life.


"Rickets" is another chaotic ride, Chino this time tackling the topic of what seems like domestic oppression. He goes on to bark about all the things he does too much, screaming his way through the chorus, "You're probably right this time, but I don't want to listen, you're probably right this time, but I don't even care." This is not one of the strongest tracks, but on an album full of strong tracks, it hardly blemishes the overall portrait the band was trying to paint. The video posted to the right was created by a fan, and I have to say, it definitely coincides with the theme of the record.


The band finally takes a more mellow turn when they reach "Be Quiet and Drive (Far Away)." Chino doesn't scream as much on this one as he does croon delicately over the verses and plead for a peaceful getaway by the time the chorus rolls around. The track is not really all the mellow, only in chord choice. This is not a punisher as much as it is a meaningful slab of redemption. The guitar riffs are pretty redundant, but the overall sound works really well, even when Chino comes in just before the end with his injured cat-like snarls and hisses. This is something he also did from time to time on their first album, and while "Be Quiet and Drive" is an exemplary track of the band's progress, they still manage to retain some of the old gimmicks that put them on the map. The video posted is a rare acoustic version of the song.

The next track, "Lotion," is probably the most aggressive of the 10 tracks. Chino almost immediately begins his snarl-fest, unleashing his highly-original scream that eventually came to be so emulated. Chino's lyrics throughout the album are cryptic and brilliant, and though this is one is harder to nail down just off listening alone, he continues his assault on the facade of glamour, belting out "It's classical anyway, how cool are you? I remember." Classical certainly alludes to beauty, and Chino gets dirty beyond the chorus with "I feel sick, right here." The guitars are intense and gritty and meticulously stunted in the ways of metal, as that's where Stephen Carpenter's roots are. This is a sick song in which you can practically feel the anger surging from the stereo. "Dai the Flu" takes it back down a notch, but only slightly. "I've always wondered what it takes, fifteen stitches and a soft parody to make my eyes be like deceit, believe the sting proves heart to me. Now I know that you love me, thank God that you love at all." The guitars are not metal, but they are heavy, regular old riffs made crunching and stark. Steph climbs the fret board in the breakdown while Chino goes off, literally, with, "What surprise, I was right here going off and going on." This track is one of my favorites on the album. Songs like this one give a face to the duality that Deftones are trying to achieve here - the yin and yang, pretty and ugly, clean and grimy. Dai is the middle name of now-departed bass player Chi Cheng, and the song was first known as "Before the Flu," though it was changed to honor Cheng.

The only track that's even remotely skippable is actually one of their of their most popular. Near the end of the album, the gang gives us "Headup," which is incredibly simplistic in terms of riffage and drums. Chino rhythmically sings, rapping without rapping until Soulfly metalhead Max Cavelera comes in on the chorus with his guttural growls. This track is really not all that cohesive with the rest of the songs. It's simply a quick shredder to add just so the record has an even number of jams. In my personal opinion, they should have added hidden track, "Damone" in place of "Headup" on the album's track listing.

On a positive note, when "Headup" ends, I know that "MX," the last track, is next. "MX," or Max, is heavy and brutal and even a little sexy. Chino soars through the track flawlessly, musing on the topics of vanity and excess. "Let me think about girls and money and new clothes, thirty nights of violence and sugar to love." He then moves the evening's romance out to the balcony, breaking the porcelain face of the glamorously enamored, threatening to "Shove her over the railing, you make it so easy." This track, along with "My Own Summer," "Around the Fur," and "Mascara," are my personal favorites on the record. 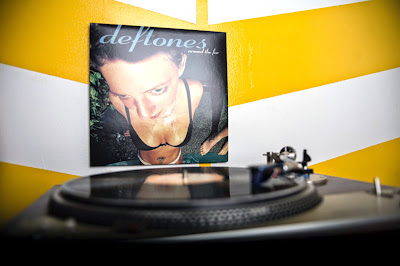 Some may not agree on "Around the Fur" being the best Deftones album, as many prefer "White Pony." I really am a sucker for a good concept album, and Deftones perfectly captures the veneer of beauty glazed over the surface brutality and decay. This record is very much like a short film to me, one about the rise and eventual decent of the Hollywood starlet whose nightlife has finally caught up with her. Deftones begs the question of what exactly lies around the fur and the glitz and the decadence - the answer is something very dark and brooding.
Posted by Will at 2:55 PM