A Case for Cleo 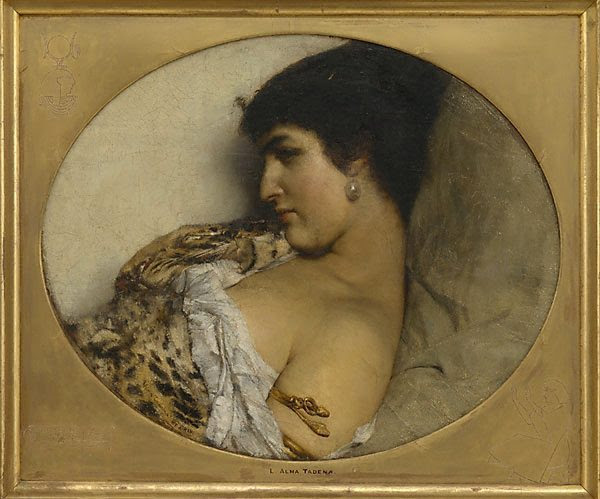 Coming off of the larger-than-life mythos of the Green Fairy, I thought I would tackle another femme fatale gargantuan, one that left more of a direct mark on world events. There are a few things that Cleopatra Ptolemy and the Fairy have in common; their powers of manipulation and seduction, and their influence on artists and writers throughout the centuries. Cleopatra's name is nearly synonymous with beauty and harlotry, though these words couldn't be farther from the truth. As she makes for an inimitable muse, she certainly must be done so for all the right reasons, not the ones borrowed by Rome's, and therefore the entire world's, skewed view of her. 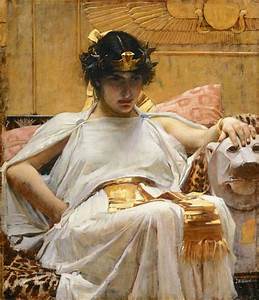 Cleopatra Prolemy VII Philopater was born in 69 BCE, daughter of the Egyptian pharaoh Ptolemy Auletes. Cleopatra was a descendant of Ptolemy I Soter of Macedonia, who had been a general and distant cousin of Alexander the Great. Therefore, Cleopatra touted her heralded ancestry to the young conqueror, as any female ruling in a man's world might if she wanted to be taken seriously. When Ptolemy I took over Alexandria, a city Alexander had named after himself before his death, he ruled the Egyptian metropolis with skill and ingenuity. Ptolemy of course was Macedonian Greek, and in order to be taken seriously himself and to assimilate with the lower classes of Egyptians, he created a deity in Serapis, who was a melding of Zeus and Egyptian god, Apis. Fast forward nearly 300 years and Cleopatra is the only Ptolemy to speak fluent ancient Egyptian. She could also speak 6 other languages, including her native Macedonia Greek, Latin, and ancient Syrian. Yes, Cleopatra, while she might have claimed a small portion of Egyptian blood, was in fact Greek.

Cleopatra was not a beautiful woman by the classical standards. Exaggerations of her looks probably came around the time of the first depictions of her, namely in Shakespeare's Antony and Cleopatra. In The Divine Comedy, Dante mentions nothing of her looks as he crosses paths with her and Helen of Troy in Hell, only that he feels sympathy for her, as she was ultimately doomed by love. While she may have developed some love for Antony at some point, she was certainly not directed by romance. She formed an alliance with Julius Caesar through her powers of seduction, and tried the same thing with Antony, her most primary of reasons being to keep her beloved Alexandria from being swallowed up by the Roman Empire. Yes, Cleopatra claimed her powers of seduction, but she did so without an overwhelming sense of beauty. When she spoke, it was said that her voice was eloquent, that she was highly-educated in linguistics, mathematics, astronomy, finance, and international relations. She was actually a very strong leader who appeased the people with her foreign policy, her constant supply of grain, and urgency toward bolstering her navy (for reasons of trade and war alike). 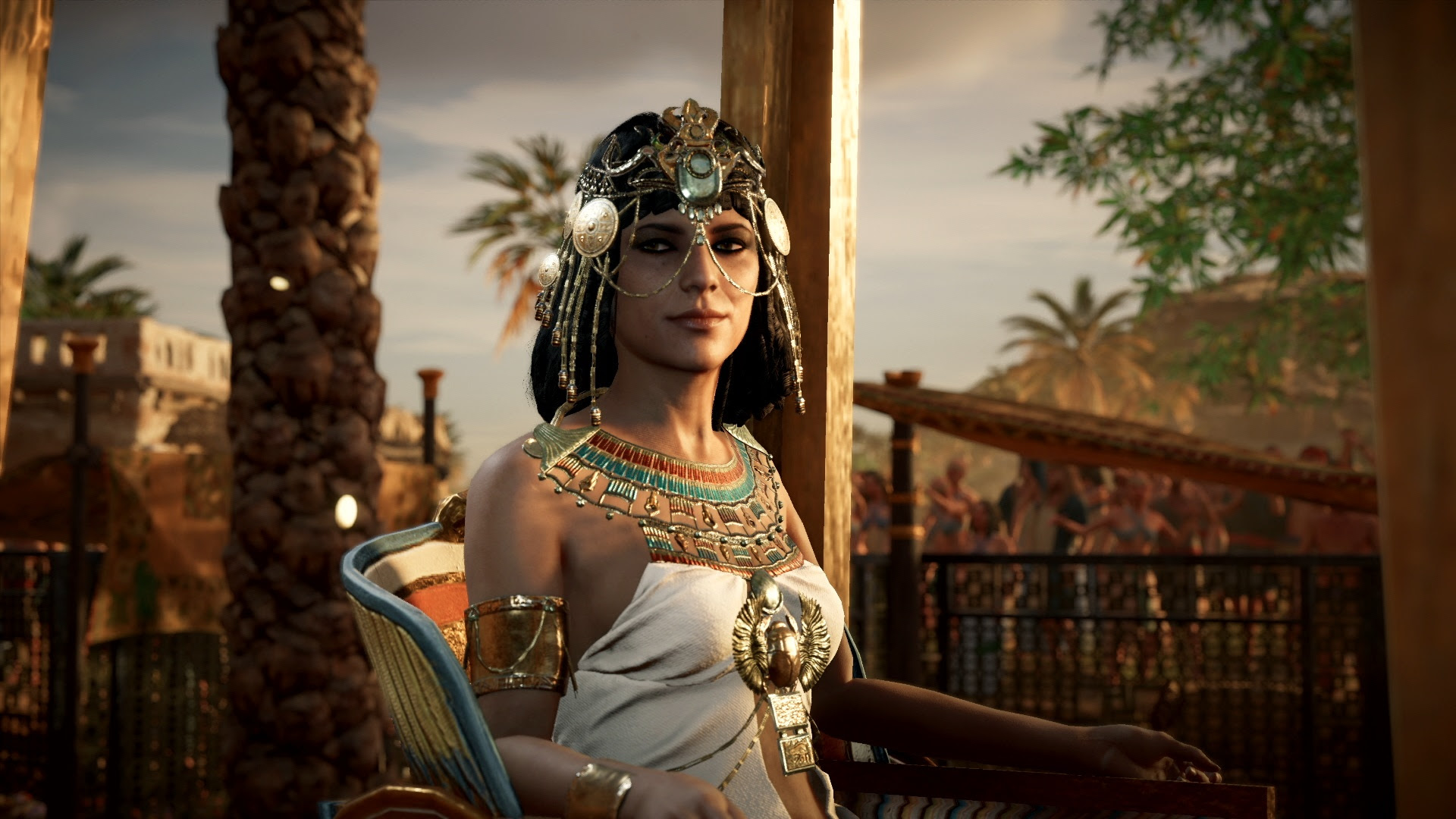 However history sees her, there is certainly a mythos that popular culture has tried to capture. Cleopatra has been referenced throughout the ages through poetry and art, and in the modern age through movies, TV shows, and TV ads. She's nearly synonymous with ancient Egypt, even though was more Greek than anything else. Comedian Sandra Bernhard and Kim Kardashian have posed as Cleopatra in magazine shoots. Cleopatra has been brought to life Elizabeth Taylor and by HBO's short-lived series Rome. She is the constant subject of the art world, both mainstream and indie, and is a subsidiary character in the newest installation of the Assassin's Creed saga. Two of the most recent notable books written about her life have respectively inspired an upcoming biopic, and inspired a novel I wrote years ago in which Cleopatra is seen as a shrewd businesswoman. 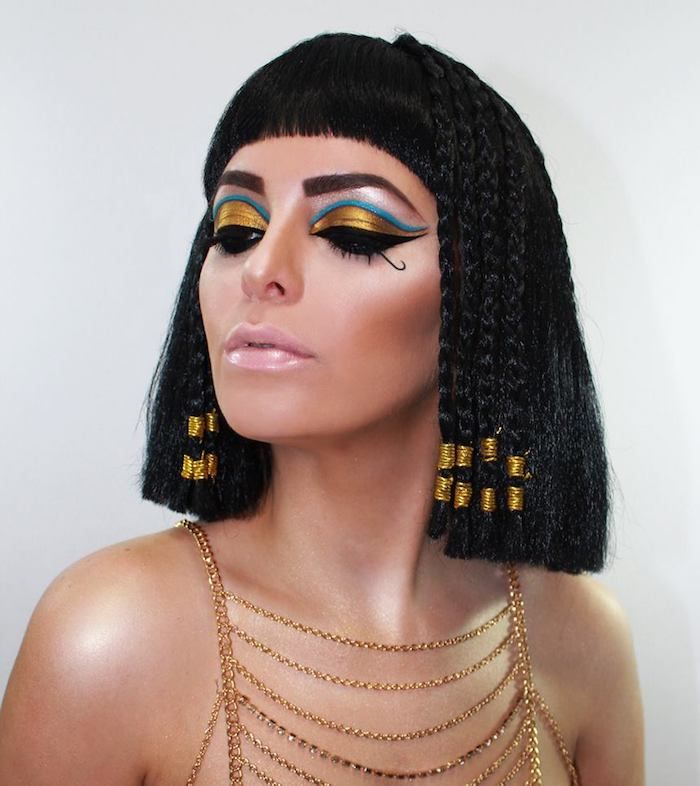 "When the smoke cleared, I found that Cleopatra was actually more pleasing to the eye than the stories of her suggested. Her coinage painted an unflattering picture of her, all hooked nose and manly features. Now standing before her, she could have hardly been any more feminine.

Her face was both glossy and honey-hued, her hands and forearms covered in the henna ink designs worn by Mardian. Her eyes were a chestnut shade of brown, heavily-decorated with hues of charcoal black and metallic blue. Her lips were full and brightly-colored a shade of rosy red, truly charming and complimentary of her ever so slight overbite. Her nose was only slightly curved, proving its hooked qualities more anecdote than actuality.

Her sleeveless Doric dress was multi-layered and low cut, revealing her broad shoulders, her well-defined clavicle, and modest cleavage. Her face was slightly elongated, though her hairstyle paid it heavy compliment, neatly braided into traditional Ptolemaic melon rind rows. She had fashioned a royal diadem upon her brow, the image of an Egyptian cobra rearing its head, exposing its ominous hood at the center. She wore twisting golden bands upon her upper arms, meticulously speckled with pharaonic images and multi-colored jewels. Her necklace was of the same quality, broad and highly-detailed, pleasantly loud upon the eyes.

Her initial appearance to us was highly accented by the sweet incense burning brightly, perhaps to coerce the Roman contingent into terms that might suit her favor more than ours. Her son by Caesar sat perched at her side, bearing every bit the facial features attributed to his deified father."

Based on Cleopatra's ancient descriptions and her official coinage, she was depicted as hook-nosed and manly. Historians have debunked this idea, being that Cleopatra herself would have signed off personally on the coins bearing her image. There is no way she would have depicted herself as such without a very good reason. It makes sense that she would have wanted to associate herself with Rome, mimicking the hook-nosed depictions of its greatest generals. It also makes sense that Cleopatra might have asked to appear manly because of her gender in such a male-dominated world. Scientists have recreated the only bust of Cleopatra that has ever been found, giving us the image to the right. She is not overtly beautiful but more in an unconventional sense, especially given her charisma and high level of intelligence. Her nose is very Greek, though she is far from manly. The surviving depictions of her were Roman, who just happened to turn out to be her greatest enemy. As you know, history is written through the eyes of the victors. 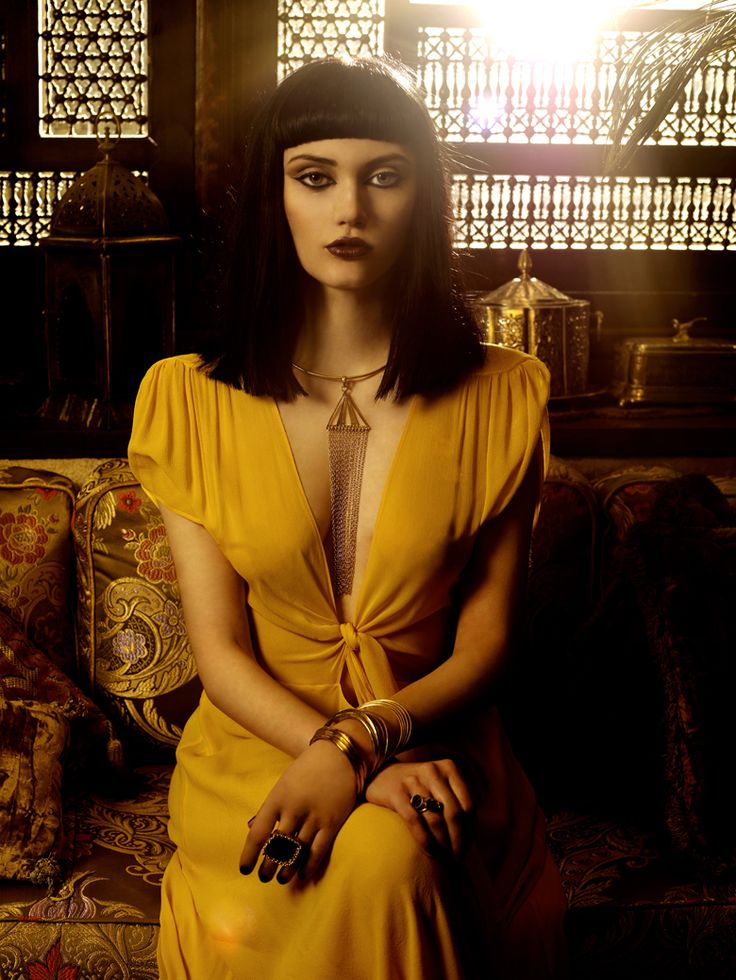 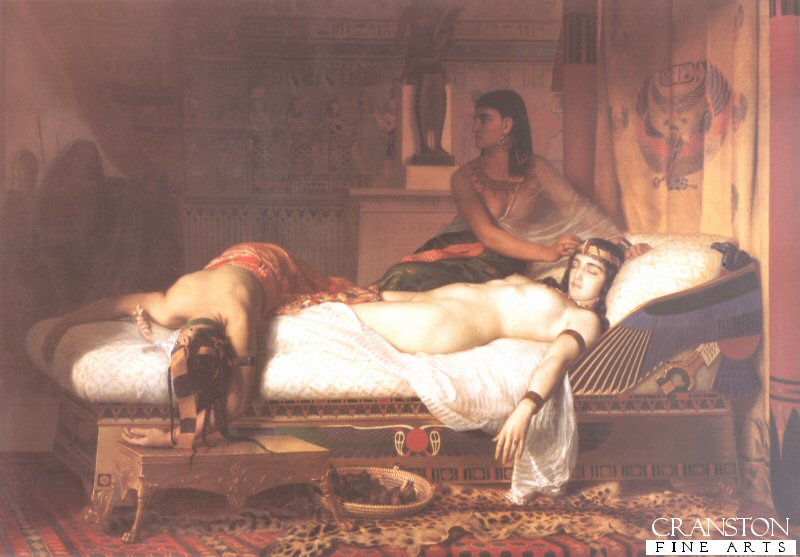 Cleopatra was a master strategist. Everything she did was meticulous and deliberate, from her coinage to her political and romantic alliances a with Caesar and Antony. When she died, Alexandria and Egypt as a whole were annexed by Caesar Augustus and his Roman Empire. That death is shrowded in mystery, as it's said that instead of allowing herself to be paraded a prisoner through the streets of Rome, she allowed an Egyptian cobra to bite her on the breast. A more recent chain of thought has her being murdered by the Romans, who then cooked up a fantastical story about her demise. In any case, the bodies of she and Antony, who were buried together, have never been found.

Suffice it say, Cleopatra still manages to capture the imagination. Sure, there were other powerful, intelligent, female rulers throughout the history of the world, many with highly-interesting stories to tell. Though, Cleopatra Ptolemy was a descendant of Alexander the Great who made Egyptian culture pop with a Macedonian Greek flare. She captured the heart of two legendary Roman military men in Julius Caesar and Marcus Antonius. Because of her defeat to Octavian, who changed his name to Caesar Augustus in the direct wake, the Pax Romana, or great Roman Peace, was born. Cleopatra bridged one culture to another, and eras of the ancient world to one another the same. 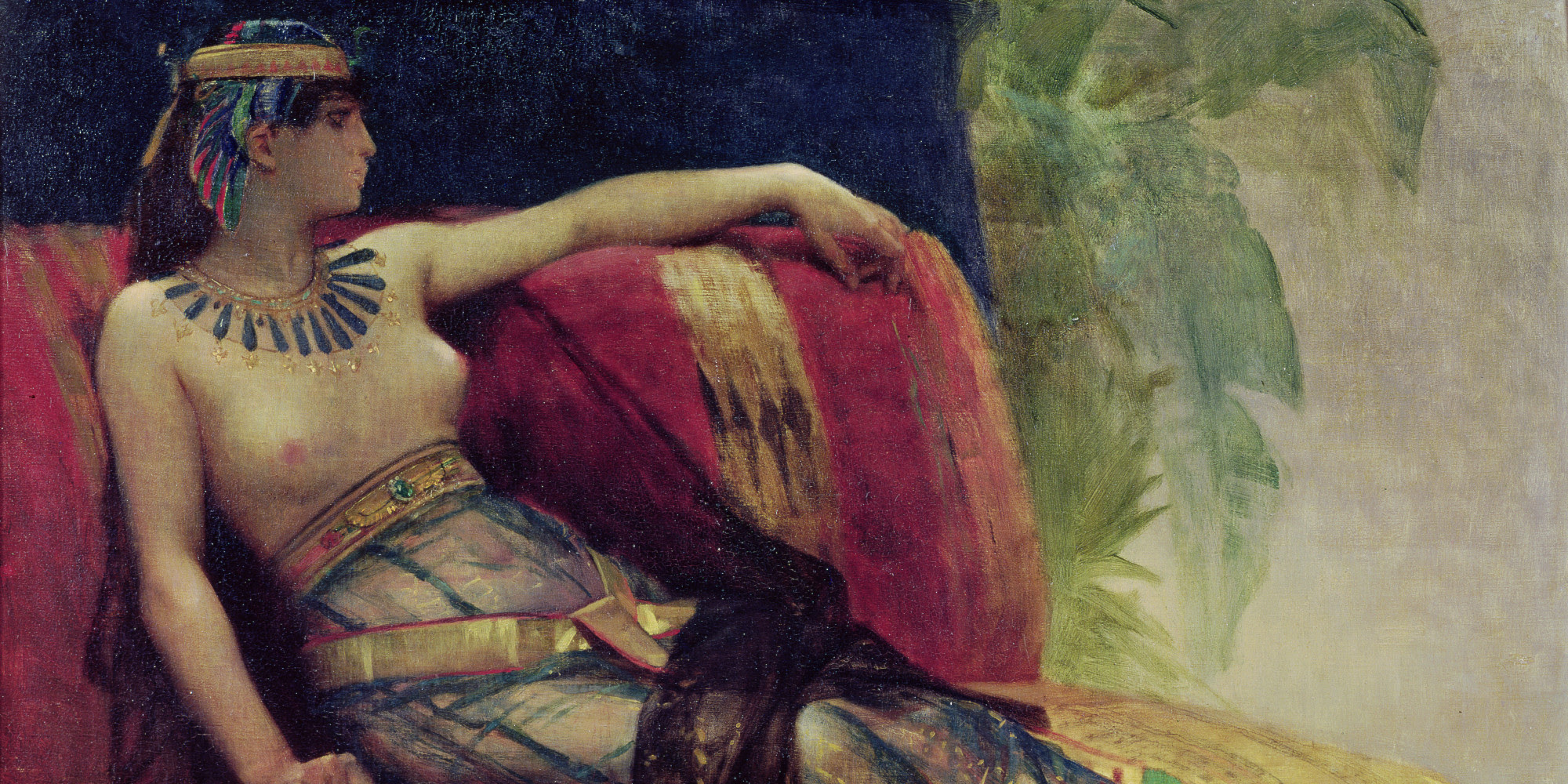