My wife and I were just recently talking about Gothic horror movies set in the Victorian era. While there are several that I love, including Bram Stoker's Dracula, my personal favorite just barely missed my top 10 historical movies of all time (though I may be forced to reconsider). I decided to review here for that exact reason. 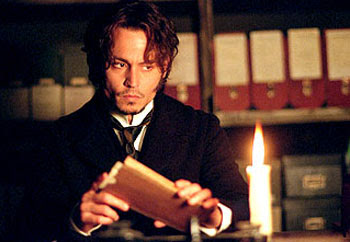 From Hell is my favorite Johnny Depp vehicle. As real-life Jack the Rippper-case detective Frederick Abberline, Depp is likable, dark, tormented, flawed, and incredibly anti-Victorian in his forward-thinking tendencies toward police work. I know the title of the movie sounds pretty ominous, but it's named after one of the infamous Jack the Ripper letters that was mailed to Scotland Yard (London police) in 1888. I saw the movie in the theater when it first came out, and later bought the DVD. As a former Ripper enthusiast, I owned several books and spent countless hours searching the web for the most plausible suspects in the centuries old cold case.

Abberline has a gift. He almost has a second sight, where he can see visions of events before they happen, but only in choppy increments that he has to piece together. Abberline is a Scotland Yard detective, but a highly-unusual one, as he spends his extra time chasing the dragon (smoking opium) and drinking absinthe laced with laudanum (another opiate). Sure, this makes him a flawed character, but it probably has something to do with his wife dying in childbirth, and the fact that he has never quite gotten over it.

Abberline is very Holmsian in his approach to detective work, employing the tactics of deductive reasoning to track down the killer. Jack the Ripper also likes his absinthe, but he drinks it alongside his blood rare steaks and the carved-up kidneys of his victims. Abberline and his partner, Shakespeare-quoting detective Peter Godley, find each of the corpses of the Ripper victims after he has struck. Throughout the process, we are introduced to one suspect after another to keep us, and Detective Abberline, guessing.

The movie is dark and dreadful, Gothic horror at its finest. Johnny Depp pulls off an excellent East End London accent for the part, as do the Ripper victims themselves, five lowly prostitutes who are being picked off one by one. In real Ripper lore, the murders were unrelated. In From Hell, based on the graphic novel by the same name, all the prostitutes know each other, and have bore witness to an event that renders them all liabilities. Abberline just happens to fall for one of them, the Irish immigrant, Mary Kelly (Heather Graham).

I think that From Hell didn't make my top 10 historical list because I've seen it so many times. When I went through a phase of obsession towards the Ripper case, and towards absinthe for that matter, I watched the film frequently, picking up new tidbits here and there with every viewing. The Ripper turns out to be someone you would never imagine, and his reasoning is even more of an elaborate shocker. Of course, the murders involve a conspiracy, which even involves Scotland Yard itself. Abberline must go rogue in order to upend the crooked cops, and he must dig a little deeper in order to find the identity of the Ripper before finally confronting the serial killer. 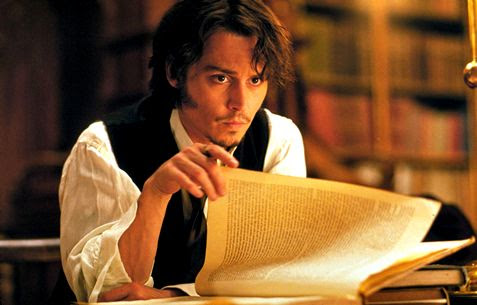 Strangely enough, the chosen directors for the movie were brothers Allen and Albert Hughes (Menace II Society, Dead Presidents). They are know more for their vivid, predominately African-American portrayals, but in this case, decided to give 19th-century London a shot. They do an excellent job of creating a lurid, menacing atmosphere, and keeping the actors to that East End accent that Abberline and the five Ripper victims own so well. 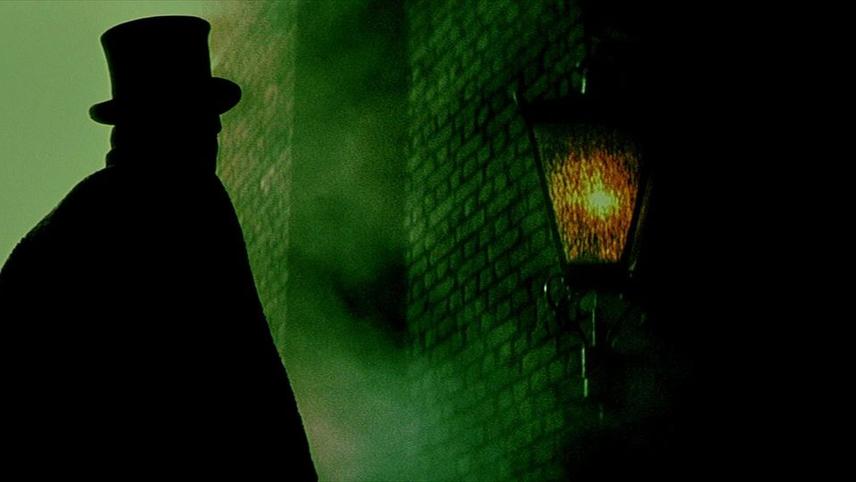 Johnny Depp's Abberline was a major inspiration for one of my own novel characters, Cameron Dupree. Both have a second sight sort of gift, both are very solitary figures, and both are wholly addicted to absinthe. Abberline is a great character, something between Sherlock Holmes and Romantic poet. He's like Holmes with his meticulous attention to detail and his deductive reasoning. He's likened to a Romantic in his clothing style, his substance abuse, and his pushing death to its upmost limit. He's haunted by the past, and by the future, which probably explains his massive opiate addiction. In any case, this role is just another feather in Depp's cap as a character actor, a far more serious version of his Icabod Crane from Sleepy Hollow. This movie is a lot of fun if you tolerate the morbidity, the gore, and the overall sense of bleakness that the film conveys.