Now streaming on Amazon Prime is the sweeping Russian epic, Viking. I've long been looking forward to this one, as it is very unique as far as Norse history goes. Vikings from Norway and Denmark raided and set up settlements in England, Ireland, Scotland, France, Greenland, and Iceland. Vikings from Sweden headed East, trading up and down the Volga River in Russia until they finally made Novgorod, and Kiev, the now capital of the Ukraine, their homes. Of these early Swedish Vikings was a man named Rurik, a chieftain whom the Eastern Slavic tribes asked to be their leader. From this came the Rurikid Dynasty, which ruled Russia until the early 17th-century. Vladimir I was born of this dynasty. He is the great-grandson of Rurik and the star of Viking. The Viking rulers and their descendants were called the Rus, from which the name Russia and Belarus are derived. In the movie, Vladimir has two half-brothers, Oleg and Yaropolk. Yaropolk wants to rule Novgorod and Kievan Rus himself, so he kills Oleg to become ruler, even though Novgorod was granted to Vladimir by his father. In the movie, Oleg's death seems accidental, or at least one in which Yarolpolk isn't responsible for. In any case, Yaropolk is painted as the bad guy, the usurper, who Vladimir will not stand by and watch become Grand Duke of both capitals.

Vladimir is meanwhile banished to Sweden, where he still has cousins. With the help of Viking chieftain, Khevding, Vladimir assembles an army of Viking mercenaries to strike back at Yaropolk and take back Novgorod and Kiev.

Up to this point, we sort of see Vladimir as a hero, a gallant warrior who commands a loyal army of Vikings, even when he confusingly takes his first wife, Rogneda, by force. Yaropolk is seen as the bad guy, who reluctantly agrees to a private meeting with Vladimir. This is when a crew of Vikings emerges from the shadows to stab Yaropolk repeatedly, leaving him bloody and confused and dying. Vladimir seems to feel at least a little remorse for killing his brother, but he is now the undisputed Grand Duke of Novgorod.

Varyazhko, a loyal to soldier to Yaropolk, won't relinquish the crown so easily, as he swears vengeance on Vladimir and army of Vikings. Here is where the lines start to become a little more blurred. What Varyazhko is doing seems legit, and we're forced to look at Vladimir in a new light. Was he right to murder his brother in cold blood, lured in by the promises of a peace treaty? Varyazhko assembles the help of a Turkish nomadic horde, who greatly resemble the Mongols. They are good on their horses, even better with their bows and arrows, and they fight at Varyazhko's side through one battle after another. They are cast as the answer to the Viking army on the other side of the brewing war, which certainly brings to mind the class I took at Wyoming on the Mongol Empire.

Meanwhile, Vladimir wants to take another wife - a wealthy, royal Byzantine princess, and agrees to do the dirty work of the "Romans" as payment for the political and matrimonial alliance. He already has Rogneda, and has long had his eye on Yaropolk's Greek wife, Irina. She is calm, astute and wise, representing Byzantine values in a Slavic-Scandinavian netherworld of grit, mud, and blood.

Vladimir becomes a little more tyrannical with every conquest, and he starts to fall into serious debt to his Viking mercenaries from across the pond. At one point as he's trying to take a city as a favor to the Byzantines, Vladimir has the Viking long ships beached on the top of a rolling hill so they won't be tempted to head home. This is when Varyazhko and the steppe horde attack. When the Vladimir and the Vikings see what's happening, the hill and the valley below quickly become a mud bowl when a downpour strikes. Vladimir and his Norsemen heave the ship from the blocks and course them down the muddy hill toward the waiting nomadic warriors commanded by Varyazhko. This made for quite the epic battle scene, captured here by the director's cameras. 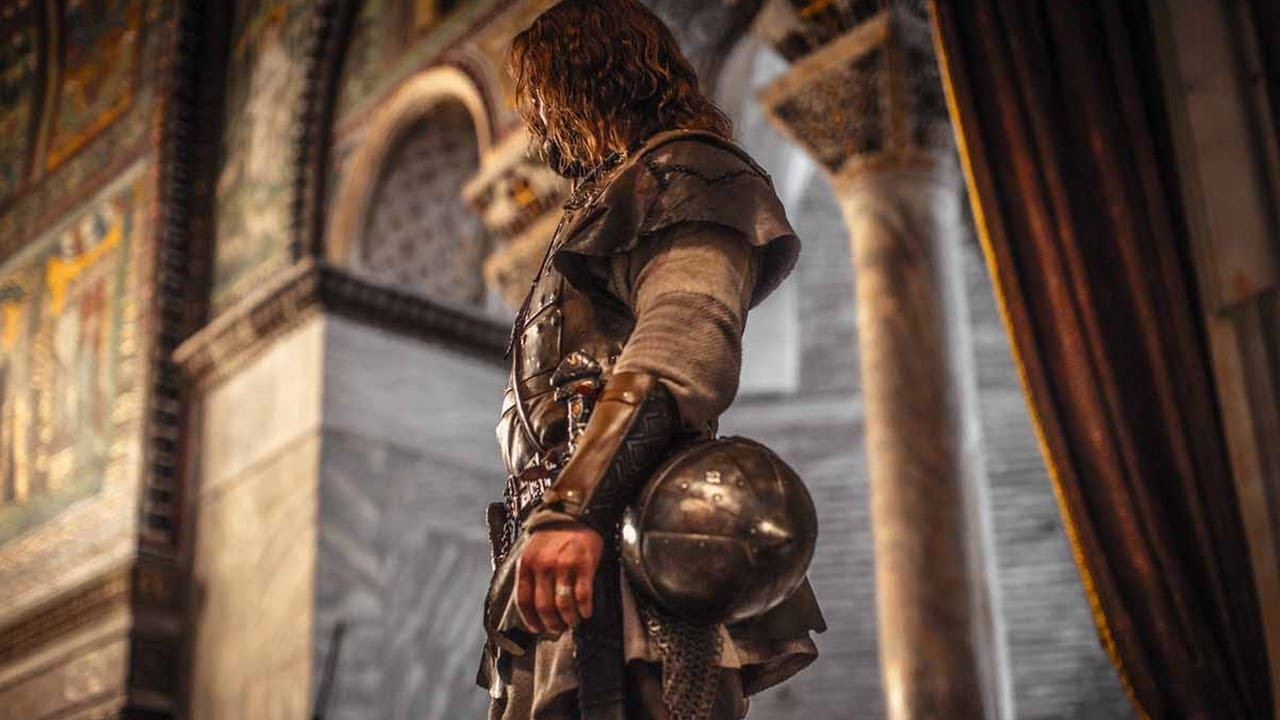 What happens next is what some critics called a bit of Christian propaganda. After reclaiming the last stronghold city held by Varyazhko, Vladimir admires the cathedral, where he is approached by the holy man who guides Irina along in her spiritual walk. This serves a turning point in the history of the Kievan Rus. Vladimir breaks down and cries, confessing and repenting of each and every one of the sins he's committed in reclaiming the lands usurped by his brother. He even has a final fight with on the beach with his best friend and comrade, Rogvolod, over his new conversion, with Vladimir swearing to himself and to God that his killing days are over. He is the first Grand Duke of Novgorod and the Prince of the Kievan Rus to convert to Christianity, and subsequently converts his entire kingdom.

Viking takes us from the wintry hinterland's of Russia to the steppes of Asia Minor to the sunny tributaries of Russia's most renowned rivers. Viking is a sweeping epic, the most expensive movie ever made in the history of Russia. Upon its release, Viking was a major point of contention for Russia and the Ukraine, being that both countries claim their national identity from the exploits and the influence of the Kievan Rus. We even get to see a Viking Berserker in action, a Viking special forces operative, wielding a brutal hammer and a bearskin headdress. He even goes through the pre-battle ritual of drinking a hallucinatory cocktail that fuels the blood rage needed for war. The Viking contingent even encourage Vladimir to take part with them, blurring his vision and muddying his senses.

The battle scenes are bloody and visually popping and the drama is high, with Yaropolk's untimely death coming fast and full of tragedy like a Shakespearean play. The dialogue is hard to follow if you watch it in its original Russian, which I did for the sake of authenticity. There have only been 2 movies made about the Rus, the other being The 13th Warrior. Viking may be a propaganda piece depending on your opinion, but that makes it no less entertaining for a non-partisan Westerner like myself.